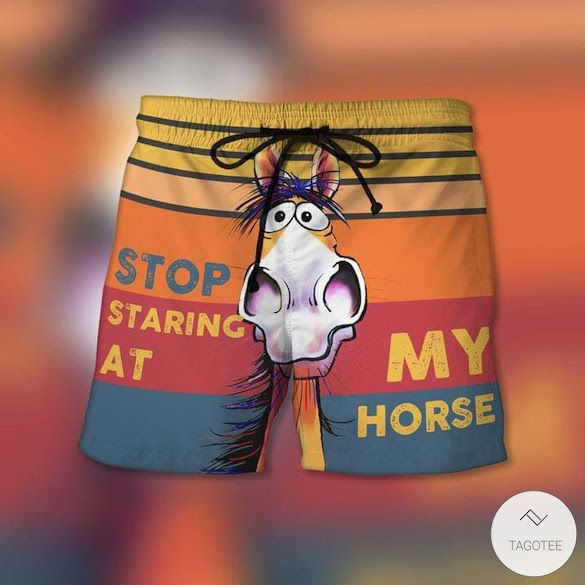 According to Ms Stephenson, it was 'terribly exciting' to have the royal party staying at their home and the royals mucked in with the rest of the family.

In a segment, narrated by Mrs Stephenson, she said: 'The Duke of Edinburgh is trying to get on this lilo, and he has to have several attempts. The royal couple knew that we were filming, and they didn't seem to mind that we were.

'And the Queen also had an identical camera to my mother. She was also taking similar shots.  That was the Queen's smile, which my mum very cleverly caught. Great fun, we loved it.'

Sir Willoughby and his wife gave the Queen and Philip a stocking each for Christmas - containing a dog's lead for the Queen and a blue and white Wedgwood ashtray for Philip, which caused much amusement as it had his wife's head on it. Stop Staring At My Horse Beach Short

After lunch they went to the private pool along with the Queen equerry at the time, Johnny Spencer, later Earl Spencer and father of Princess Diana.

According to Mrs Stephenson, towering Philip - wearing tiny dark 'budgie smuggler' swimming shorts - tried several times to get on the lilo, but each time plunged into the pool roaring with laughter.

Always mindful of her public image, Queen didn't join in, but happily watched her husband from the patio, her own video camera in hand, comfortable to film and be filmed.

A young Queen with President Tito in Belgrade in 1972. The image shows a light-hearted moment for the Queen and President Tito during her first visit to a communist country. During her stay, informal footage captured them in off-guard moments

Rarely seen footage of a young Queen eating an orange with President Tito during her visit to Belgrade in 1972. The Queen is rarely seen on camera eating - she very much disapproves of that - but happily tucked into the piece of fruit

With almost 70 years of royal globe trotting under her belt, the Queen is the country's most experienced international statesman.

And her skills were most definitely needed when she visited Belgrade in 1972 after the Yugoslav dictator Marshal Tito personally asked to meet her to mark his 80th birthday.

Footage shot by Tito's personal cameraman shows the monarch, on her first visit to a communist country, charming her host.